Saturday, August 1 and it’s now down to Utah, Nevada, and California. 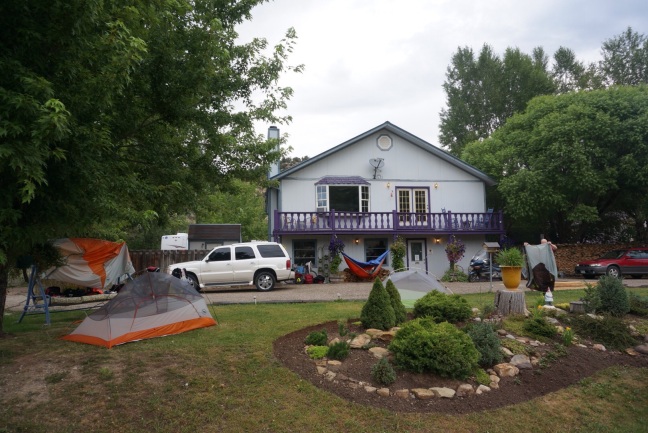 We left the RV park where we left camp around 9am. Once again, I confused another RV park owner when I told him that I just had a hammock, no tent. He was kind enough to let me stay under his 2nd story porch. Our first stop was a breakfast diner. I heard the next few days would be rough and have very little services so I stocked up and ate more than I have eaten before in one sitting on this trip, a green chili breakfast burrito and another full meal of toast, eggs, and hash browns.

The first 40 miles were very rainy and lots of traffic and roughly half way to the border I got another flat (4 out of 5 flats thus far have been thanks to Colorado). I was pretty glad to be moving on to the next state. A few miles before we crossed in to Utah we stopped at a grocery/deli/laundromat to let the storm pass, grab some lunch, and dry our clothes. During lunch I met Kerry and Teresa from Denver. They were out on their motorcycles and taking a break as well. After a few minutes if conversation they promptly made a donation to St. Luke’s!!! I have been shocked with the generosity if complete strangers! Thank you Kerry and Teresa! After an hour we were on our way to the next state.

The changes in Utah were immediate. I could now see miles ahead without any curves in the road and instead of mountain peeks we were now seeing large rock formations.

Our first pit stop in Utah was in Monticello where we got a refill on water and applied sunscreen for the first time of the day since the sun was finally shining through the clouds. 20 miles later we were in Blanding, the last town with food or water for 74 miles. I loaded my bike with juice pouches, two extra bottles of water, and granola bars. Once we were all loaded we headed for our camp site, Comb Wash a Bureau of Land Management site 15 miles outside of town. The best part is that all BLM camping is free, just no running water or restrooms. 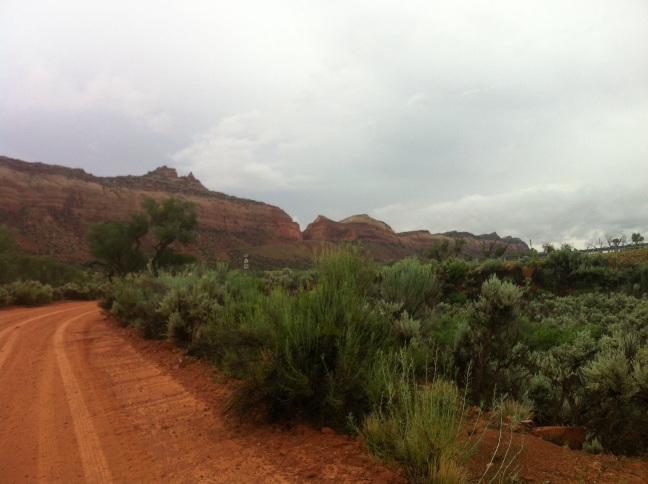 The arrival in to Comb Wash was another long and steep decent so I stayed a bit behind the other two. As the sun began to set I got a bit nervous because they were nowhere to be found, there was no cell service nor signs of human life, and the sun was setting. Just as I was about to start setting up my campsite on my own, figuring I had passed the intended site, I saw a flashing light at the bottom of a steep decent. The light was a relief and when I arrived my assumption was correct. It was Nick and Michael.
By the time my hammock was set up it was already 9pm I had a couple granola bars and called it an evening. Another long one in the books, but now less than three states to go. 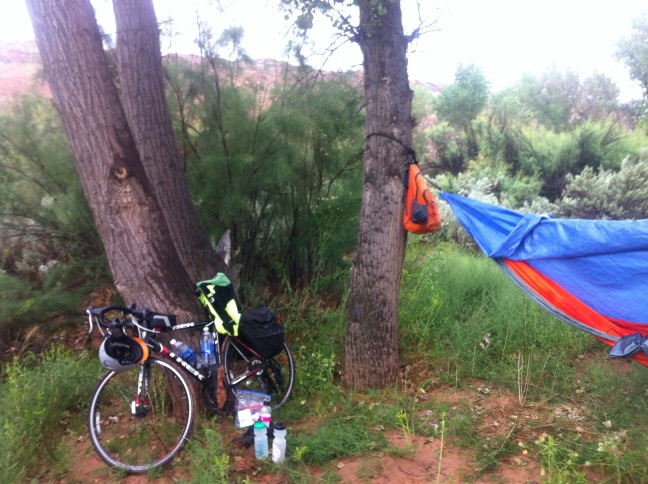