Wednesday start off MUCH better than Tuesday.  No wind and although there was some traffic there was plenty of shoulder.  The ride from Montrose to Ridgway was quite easy, although I had to change my leaky tube which was then punctured by a pinch-flat, which then turned in to another flat thanks to a staple.  It’s a good thing I stopped at Cascade Bicycles on the way out of Montrose and picked up two extra tubes because they were both used by the time I got to the Cascade Bicycles in Ridgway about 25 miles later.  As I bought my 3rd and 4th tubes of the day I mentioned that I should just set up a direct deposit with them at this rate and have two new ones shipped out every other day.  However, three flats and one leaky tube is not that bad considering I am on a road bike and coming up on 2,000 miles.  Just to show how bad the previous day was . . . I considered this a pretty good start.   After the stop at Cascade in Ridgway was grabbed some grub and drinks at a coffee shop before our 10.5 mile / 3,000 foot climb up Dallas Summit. 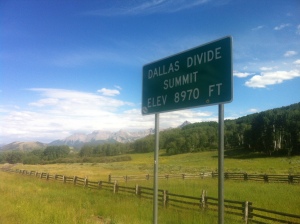 The ride up the summit was fairly difficult but the views made it all worth while and were a great distraction from the slow peddling to the top. Even better was the decent.  As opposed to other decents, this one was not very steep and through a thick forest and through amazing rock formations.  Unfortunately, I do not have any photos.  I was enjoying the ride so much that I forgot to get off and snap a few. After a quick decent I met up with Nick and Michael at the turnoff to Telluride.

We only had another 16 miles to go, but the middle 12 were all uphill.  The climb was so steep that I actually got off my bike a few times to make sure I was not riding on two flats.  This was by far the most physically challenging of all of the climbs.  As we made it to the four mile marker we all though we had another four miles up to go.  However, the hill crested and we were gifted an amazing view of Telluride.

The final four miles were downhill and most was on a bike trail.  A great reward for a very challenging day.  Even better, Nick’s friends through friends set us up for the evening and had a cooler full of beer waiting for us along with a heaping pile of roasted chicken and salad.  After dinner and a VERY warm shower I was done for the night within seconds of my head hitting the pillow. 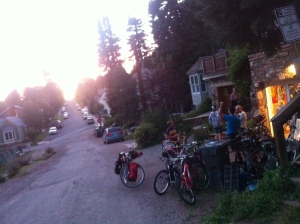