This morning I woke up in my hammock in Bryan’s garage, and it was actually the best night of sleep thus far. We took our time getting ready and Bryan and his family had bacon, biscuits & gravy, eggs, and juice waiting for us. The graciousness of Bryan and his family is something to be admired!

We did not head out until around 1pm, and did no make it far as we had to make a pit stop to check out the worlds largest sassafras tree. Although we were only planning on sticking around for a few minutes we ran in to a couple from Wisconsin, Karen and Drew. They were very excited to hear about the ride and the fundraising efforts for St. Luke Foundation. We stuck around for about an hour and chatted about everyone’s’ travels and love for nature. Then we were off. 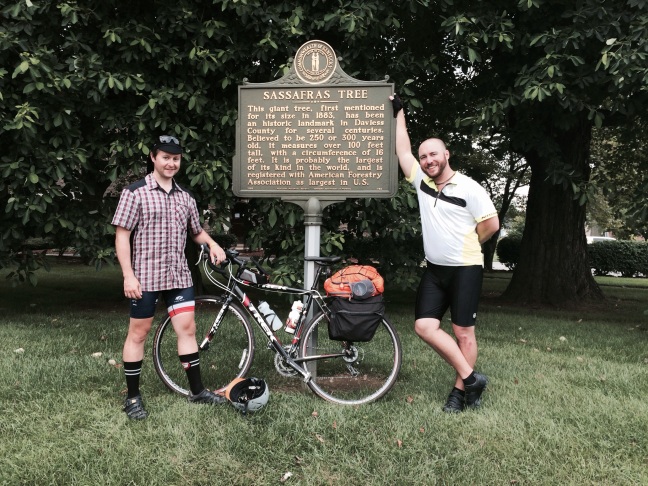 The ride today was dry and not too difficult but we were both feeling a bit flat after the long day before. However, the second 20 miles were a bit more exciting. In Beech Grove we made a stop for some Gatorade at a gas station. While I was waiting outside I met a man who refered to himself as Murph The Surf. He was pretty excited that we are biking to the west coast. In fact, he seemed excited about everything. He then asked if I had seen his vehicle. He said he knew he parked it around there somewhere, as he looked over his shoulder and spotted the only four-wheeled machine in the lot. He exclaimed, “There it is!” And just before he took off he mentioned that his name was actually Randy, he just always wanted to be called Murph.

Ten miles later we pulled in to Sebree. The moment we stopped Moose and Tommy pulled up and pointed us toward the Cyclist Hostel at the baptist church. He also mentioned that he met Nick’s friend who passed through a month earlier. It’s a small town.

A member of the church who lives across the street let us in, gave us a tour of the mattresses and couches for sleeping, shower, laundry, etc. Above and beyond on the hospitality front!  And here I am, on a couch in front of a big screen in the basement of the church watching the USA Women’s National Team accept their third World Cup!!!