Goodbye to the misery that is Missouri and hello to Kansas!  I never thought I would be so excited to visit this place, but after the past four and a half days I am ready for corn fields as far as the eye can see.

Roughly 18 miles in to the ride we made a stop at a convenient store, and lucky we did. Ten minutes later there is a torrential downpour with VERY high winds and lightning. What was going to be a 10 minute break turned in to an hour and a half. It was taco-Tuesday, so it turned in to lunch.

When we started rolling again it was still a bit damp and windy, as well as hilly. Roughly 15 miles later the clouds parted, the hills, were less steep, and I saw my first cardinal in the state of Missouri. It almost seemed like a sign of good things to come.

At this point we were on a mission. To get some pie from the famed Cooky’s Cafe (we have been told tales of their selection of over 40 homemade pies from other cyclists) and then to sprint for the border.

The pie did not disappoint!  I got an Amish style strawberry rhubarb pie with a scoop of ice cream, a tall glass of milk, and a hot cup o joe. Nick certainly outdid me by eating three pieces of pie all with ice cream. Quite impressive! 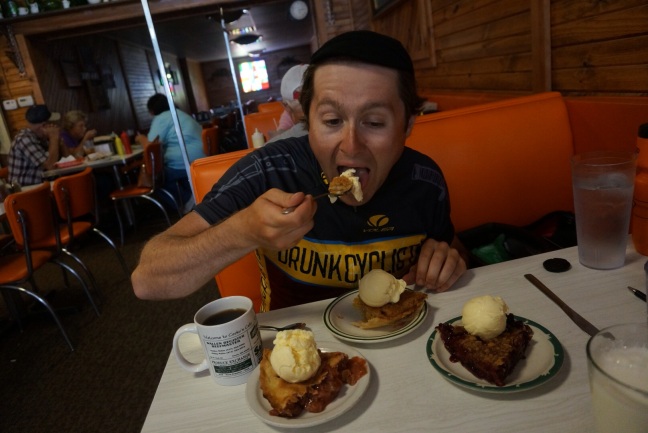 As I was finishing up a gentleman asked if I was one of the bikers. Once again I went through my explanation of what I am doing and why.  Just as I was handing the cashier my money, my new friend Jim came up and insisted on paying for the meal. He mentioned that he has done some work abroad and that he appreciated the good work. It was a great final now by the state of Missouri.  Thank you Jim!

At this point we were 34 miles to Pitsburg, MO, and we made it in great time. Just over two hours. However, 4 miles before our final destination we stopped where there used to be a welcome to Kansas sigh for a photo-op. Unfortunately the sign had been blown apart by high winds, so pictures with two lonely posts was the welcome to the states. And welcomed it was!

This evening we splurged and are sleeping at a Super 8, and to be honest  it feels like a 5-star hotel.   Tomorrow we begin the journey to Colorado.